ALL YOUR FAVOURITE SHOWS ARE HERE
Play games with the BEST Cartoon Network shows. Gumball, Darwin, Robin, Raven, Finn, Jake, Four Arms and many more characters you love are waiting for you!

PLAY THE BEST GAMES
Score Goals, beat the bad guys, jump from hills and sky scrapers, collect badges and power ups, you can play awesome games in the Cartoon Network Games app. The kids’ app that allows you to play games wherever you are.

GUMBALL GAMES
Visit Elmore and play games with all your favourite Gumball characters – Gumball, Darwin, Anais, Banana Joe and many more! In “Elmore Breakout”, Gumball and his friends escape Elmore Junior High. Or get into the swing of things with Gumball and Darwin in “Swing Out”, you need to move them through space from platform to platform..

TEEN TITANS GO GAMES
Do you like fighting games? Check out “Slash of Justice” and face wave after wave of fearsome foes, battling them off to reach the H.I.V.E. If you prefer some arcade action go for “Raven’s Rainbow Dreams”, she’s dreaming about being a happy Pink Raven again, so bounce her unicorn through as many clouds as you can before she gets a rude awakening!

BEN 10 GAMES
Come and check out all our action-packed Ben 10 games! Fly Ben through the mean streets blasting enemies in “Power Surge”, transforming into powerful aliens and fighting battles with fierce bosses at the end of each level. Kids can also transform into Stinkfly in “Steam Camp” and rescue innocent tourists when a beautiful nature park gets invaded by Steam Smythe’s evil robots.

ADVENTURE TIME GAMES
Enter the Land of Ooo to play fun filled kids adventure games. Protect Finn and Jake from the Ice King’s icicles in the latest Adventure Time game, “Marceline’s Ice Blast”. If you like Marceline, you are in for a treat putting her radical music to good use to ward off advancing penguins with its shockwaves. Watch out for Ice King!

THE POWERPUFF GIRLS GAMES
Join Blossom, Bubbles and Buttercup and take on the spoilt Princess Morbucks and her hundreds of flying androids in an after-school duel called “Mech Mayhem”. In “Trail Blazer”, children can test out their flying skills and stop Mojo Jojo by avoiding all the obstacles scattered in the sky around Townsville.

WE BARE BEARS GAMES
Meet all the gang – Ice Bear, Panda and Grizzly, as well as their friends. In “Shush Ninjas” you become a cinema vigilante, telling all the people eating popcorn, slurping their drinks or playing on their phones noisily to put a sock in it.

NEW GAMES EVERY MONTH
There’s always something new to play and explore at anytime. If you’re on your way to school, on the bus or going away on holiday, you can play Cartoon Network OFFLINE. Just make sure you have downloaded your favourite games into the device. Ask mom, dad or a grown up for help if your device does not have enough storage.

Check back every week for games and hidden surprises.

If you’re having any problems, contact us at [email protected] Tell us about the issues you’re running into as well as what device and OS version you’re using. This app may contain ads for Cartoon Network & our partners’ products & services.

Before you download this game, please consider that this app contains:

– “Analytics” for measuring the performance of the game and for understanding which areas of the game we need to improve;
– ‘Non-targeted’ advertisements provided by Turner ad partners. 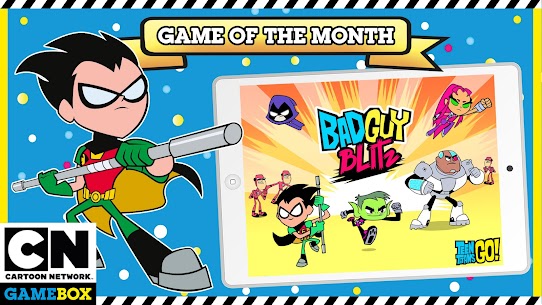